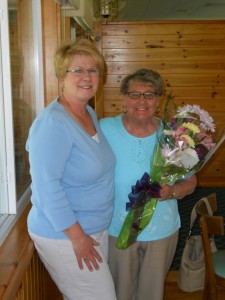 Members of the Grayling Promotional Association (GPA) are marking their 30th year promoting the community as a tourist destination, supporting local organizations and hosting community events.

GPA began in 1983. Founding members Judy Weaver-Dickinson, the owner of Weaver’s Gifts, and Jan Olson, from Olson’s Shoe Store and the proprietor of The Funny Farm, called other businesswomen on Michigan Avenue with the initial purpose of promoting business downtown. The other members were Marian Joseph, from The Grayling Mercantile, Joyce Bourrie, from The Grayling Restaurant, Maureen (Mo) McNamara, from Mac’s Drugs, Lanice Rutter, representing Flowers By Josie, Kathy Bourrie Ashton, from Spike’s Keg O’ Nails and Marion Tessin, from Art’s Lock Shop,

“There were a lot of promotions, mainly on Michigan Avenue trying to think of things that would bring tourists to Grayling and to entertain them,” McNamara said.

By their third anniversary, GPA had grown to a membership of 50 people. The three objectives for GPA were: to increase the awareness and cooperation between the business community and the community in general; to increase awareness and concern between the members of GPA; and to work cooperatively for the education, benefit and promotion of the community of Grayling. These objectives remain as the mission statement of the organization.

“Really it hasn’t changed that much as far as what it is all about,” McNamara said.

Several other women who didn’t have a retail business wanted to join GPA so its membership was opened up.

McNamara marveled at the backgrounds of many of the current GPA members, who have dynamic backgrounds and established roots in Grayling after coming to the community for several years during the summer.

Among the several community initiatives GPA has supported over the years include, donating money to the Crawford Historical Museum, painting the Grayling Regional Chamber of Commerce building and donating to Mercy Hospital Grayling building and expansion projects. In 2011, GPA made contributions to the Grayling Skate Park and the AuSable Artisan Village Gallery. In addition GPA has supported the AuSable River Festival, the Christmas Walk, planted flowers and cleaned up public areas.

GPA has done many things in order to raise money to support local projects. Currently, GPA’s biggest fund-raisers are Festival of Trees in November at the Grayling Mini Mall and Shop Grayling First Cards, which offer special discounts at local stores. Other fund-raisers include Pictionary Olympics – held every spring, and GPA’s newest fund-raiser – a Fashion Show in May. In September, GPA’s Junque in the Trunk fund-raiser is held on the Saturday of Labor Day weekend, and in October, the organization hosts its annual Arts and Crafts Show.

McNamara was recognized as one of the initial members of GPA with a bouquet of flowers at the June 4th meeting.

“I just can’t believe how it has evolved over 30 years,” McNamara said. “There are a lot of wonderful women. They’re very dynamic with wonderful ideas.”

McNamara acknowledged Judy Weaver-Dickinson for her foresight for founding the community organization.

“She was really something,” McNamara said. “We owe a lot to her.”

GPA members celebrate their anniversary with a night out at Spike’s Keg O’ Nails.

GPA meets every Tuesday at noon from April to December, and every other Tuesday in the winter-season.

“We welcome new members and visitors,” said Mary Alexander, the president of GPA.

The Grayling Promotional Association will host a group of longtime Grayling residents as they recall events and experiences from the past. It will be held on Wednesday, August 10 from 5:00 p.m. to … END_OF_DOCUMENT_TOKEN_TO_BE_REPLACED